You are here: Home » Sperm Damage

Storing mobile phones in front pockets and texting or downloading data on phones (or notebooks) held near the lap exposes the groin to radiation. The evidence that radiation from cell phones affects sperm quantity and quality in humans and animals is compelling. Many phone user manuals actually state that the device should be carried at least two centimetres away from the body.

Approximately 35% of women and 45% of men worldwide are sub-fertile. Sperm counts in men worldwide have declined by half over the past 50 years and are continuing to fall, according to a number of studies. A 2011 Finnish study concluded: “These simultaneous and rapidly occurring adverse trends suggest that the underlying causes are environmental and, as such, preventable.”

A very important paper on the effects of cell phone radiation on human sperm was published by Geoffry De Iuliis and colleagues in 2009. They found that RF exposure decreases both motility and vitality of sperm while increasing DNA fragmentation. These findings have clear implications for males of reproductive age, potentially affecting both their 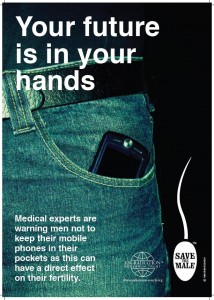 fertility and the health and wellbeing of their offspring.

Another well known study was conducted on 361 men who attended an infertility clinic. The men were divided into four groups according to their active mobile phone use sperm count, shape, ability to move towards an egg and viability. The men with the highest cell phone use had the lowest semen quality in all these areas. Men who are exposed to their cell phones for four hours per day have about half the sperm count of non users (refer graph). Surviving semen are in poor health and less mobile.

These are two of over a dozen such sperm damage studies that demonstrate serious ill effects of short-term radiation exposure on fertility. While these effects usually only last for a few days no work has been done on whether chronic long-term exposure may cause permanent effects on male fertility.